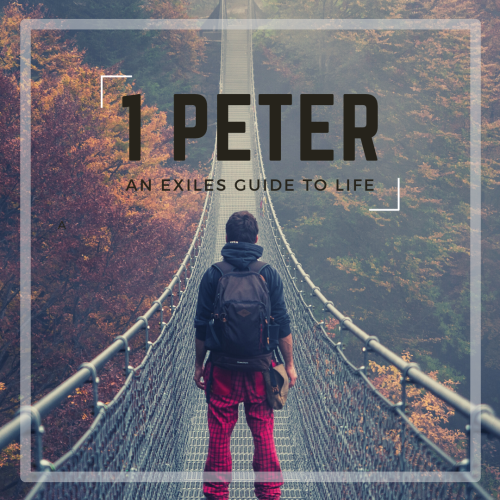 Doing Good Even if it Hurts

In his book, Resurrection Life in a World of Suffering, Don Carson tells this pretty sobering story:

“Quite a number of years ago, I knew a man in a church in England who had a privileged background. He was brought up in a Christian home with three older sisters… From the beginning of his life he replicated the Christian commitments well exemplified in his parents… As a young man, he studied at the University of Edinburgh to become a medical doctor. He led the local campus ministry group. He married the right girl from the right Christian home.

He eventually became a missionary in North Africa. When I first met him, he had left North Africa and moved to Cambridge, England, where he practised medicine while pursuing specialist training in public health. Doubtless his missionary experience and his fair knowledge of Scripture assured that it wasn’t long before he became an elder in the church…

And then out of the blue he announced that he was leaving his wife and two children and taking up with his nurse. No one saw it coming. We’ll call him John. The pastor and others spoke with him. John’s attitude at this time was, dominantly, “Why are you picking on me? I don’t see that I’m doing anything wrong.” To make a long story short, John divorced his wife and moved up north with his nurse…

About a year later, I was riding in a car with the pastor, heading to a conference. I asked him, “So what went wrong with John? What didn’t we see? How do you explain what happened?” He replied, “Don, I’m convinced that John just wasn’t a Christian.” I said, “Come again? He was a missionary in North Africa “complete with leprosy, heat, flies, self-sacrifice. All of that Christian experience-not a Christian? He knew the creeds, he was a Christian leader, an elder in the church-what do you mean, not a Christian? On what basis do you say that?”

The pastor said, “I have gone over his life again and again, and I cannot find any significant place in his life where his faith cost him anything. He grew up as an eager-to-please kid, made a profession of faith, and was feted by his family. He became a doctor-oh, everybody cheered. He fell in love with a charming young woman. Everybody cheered again. Married her. Excellent. They went to Africa as missionaries-more approval. He served in a leprosarium-cheers for the self-sacrifice. When they returned to their country, they found a good church, and he was appointed an elder-more approbation. “At no point,” said my friend the pastor, “can I find any place in his life where he made a decision to do something difficult, a decision taken not because he wanted to, but because it was right, a decision he didn’t “want to take because he knew that it was going to cost him something. He just went along, and at every point he did what he wanted to do, and he was cheered for his choices. And so when he found this pretty nurse, he did what he always did-he did what he wanted to do. And now he is the one who is surprised because nobody is cheering.”.1

It’s a sobering story, isn’t it? But it’s an important one for us to hear as we begin a new year.

Over the next two weeks, we’re jumping back into 1 Peter. Throughout his letter, Peter continually calls the church to do good because of our salvation in Christ. But as Peter calls the church to live for the glory of God-he needs to address one glaringly obvious question: how do you keep doing good, even if it hurts?

Well Peter, knowing (from his own experience) how hard this all is, writes to encourage and convince the church to keep doing good, keep loving the good, desiring the good, pursing the good, giving up the bad for what is good-even if it causes you pain. So, today, as we look at 1 Peter 3, we’re going to consider this very thing: How do we keep doing good, this year, in a new year-even if it hurts?

How do we keep doing good-even if it hurts? Well, first, we need to expand our definition of what it means to be ‘blessed’.

If you were to open up Instagram and type in hashtag “blessed”, you’ll probably find around 145 million posts. New dog #blessed. Holiday at the beach #blessed. New car #blessed. Good coffee #blessed.

Now, all of these things are a blessing from God, but in verses 13-14, Peter wants to expand our view of #blessed. Take a look:

All of us, whoever you are, whatever life-stage you’re in, our God has his eyes watching, his ears listing, and his heart beating for us-whenever one of us is rejected, slandered, threatened, or even harmed for living out the righteous life of Christ.

How do we keep doing good, loving good, enjoying the good-even if it hurts? We need to expand our view of #blessed.

How do we keep doing good-even if it hurts? Well, second, we need to fear the right thing.

I’m not sure how you respond when you’re being threatened by something, but I range between two alternatives: attack or retreat.

When I was a kid, our farm would often be plagued by thousands upon thousands of small rodents. And quite frequently, my brother would threaten to chase me with these small disgusting creatures. How would I respond? I’d either run away as fast as I could. Or, I’d slap the rodent to ground and kill it.

You see fear can make us do funny things: fear can drive us to either attack or retreat. But here in verses 14-17, Peter carves out a different path for when we’re being threatened. Take a look:

“Do not fear their threats; do not be frightened.” But in your hearts revere Christ as Lord. Always be prepared to give an answer to everyone who asks you to give the reason for the hope that you have. But do this with gentleness and respect, keeping a clear conscience, so that those who speak maliciously against your good behavior in Christ may be ashamed of their slander. For it is better, if it is God’s will, to suffer for doing good than for doing evil.” (1 Peter 3:13-17 NIV)

Peter’s calling us to fear the right thing. We shouldn’t fear people, no, we should revere Christ as Lord in our hearts. Peter’s saying that we should respect Christ, admire Christ, think highly of Christ, cherish Christ, prize Christ, hold Christ in awe, idolize Christ, put Christ on a pedestal, love Christ-ultimately fear Christ. And more than that, Peter says that we should be open to gently speaking about him.

When Peter says in verse 15, “give the reason for the hope that you have”, he has in mind the ‘living hope’ of salvation that he’s mentioned throughout his letter. So, when someone asks: “Why are you doing this?” or “Why didn’t you do that?” or “How come you won’t agree with us?”… Don’t attack, don’t retreat, fear Christ and gently speak about the glorious reality that our God-Father, Son, and Spirit-has shown us great mercy, given us a future, and brought us out of darkness and into his light.

How do we keep doing good-even if it hurts? Well, we fear the right thing. We revere Christ the Lord.

How do we keep doing good-even if it hurts? Well, finally, we hope in Christ’s victory.

So far, you might be thinking to yourself “Seriously Peter!?”. “Peter, how on earth can you say all this?” Coming from the guy who denied Jesus’ three times?” “Coming from the guy who sat by a cozy fire as Jesus’ was whipped and flogged?” “Seriously?”. How can you truly say: “It’s better to suffer for doing good than for doing evil”? Seriously Peter, you of all people!?

Well, notice that Peter doesn’t point us to his own example, but to Christ’s. Here in verses 18-22, Peter wants to motivate, encourage, and spur us on to keep doing good-even when it hurts-by reminding us that Christ has also suffered and is now victorious. And as we work through each clause, even the hard ones about Noah and baptism-you’ll find that this is actually one of the most encouraging declarations of the gospel. Take a look at the text:

(And this is where things get interesting… )

(And this is where things get really interesting… )

And… we’ll jump out of the text there…

If you didn’t know, these are some of the most widely debated verses in the New Testament. They raise all sorts of questions-Where did Christ go? When did Christ go? Who did Christ go to? What did Christ proclaim to them? You see, no one’s really sure about what’s going on-and this week I’ve added my name to the list. So, for what it’s worth, here are the three most common views you’ll find:

Now, that may all sound confusing, but the point is that Peter is using the story of Noah to make us hope in Christ’s victory. And Peter continues to use the story of Noah in verses 20-21 (let’s jump back into the text):

(And this is where is gets difficult again!)

They were saved through water, so are you, in baptism, through Christ. You see, Peter, is using the story of Noah to help us consider Christ-to hope in Christ’s victory.6 And it’s no wonder… because the situation of Noah is similar to the situation of Peter’s readers.

Peter is using Noah’s story, his reader’s story, and Christ’s story, to remind us that the God who saved Noah is the same God who will save them. And so Peter continually points us to Christ! And even more so as he comes to culmination of his work, in verse 22:

Throughout every clause, Peter points us to Christ. His life, his suffering, his death, his resurrection, his ascension. And I hope by now, Peter’s outlandishly bold statements about ‘suffering’ should all make sense to you… Why is it “better” to suffer for doing good, than for doing evil? Why continue to do good, even when it hurts? It’s because Christ also suffered bodily for doing good, and was raised in victory. It’s as if Peter is saying: “Look how Christ’s bodily suffering was not the end… ” “Look how Christ, even though he died bodily, was raised by the Spirit”. “Look how Christ, has declared victory over all who are evil, even those who commit evil against you” “Look how Christ is now at God’s right hand in heaven… where… in a little while… you too will be”.

How do we keep doing good, loving the good, desiring the good-even if it hurts? Well, we hope, trust, depend on, receive, believe in our suffering but triumphant Christ.

This year, God wants each one of us to do good, even if it hurts. Whether it’s at work, school, or home… whether it’s among friends, brothers and sisters in Christ, or even our enemies-God wants us you and I to live such good lives, even when/if it results in pain. He wants us to do what is right even when you’d prefer to go another way. He wants us to please Christ, identify with Christ, speak boldly of Christ, align with Christ, pledge our allegiance with Christ in baptism, even if all the choices are costly.7 How do we keep doing the good-even if it hurts? We redefine ‘blessed’. Fear the right things. Hope in Christ’s suffering and victory.

7. Carson, Resurrection Life in a World of Suffering, 118.