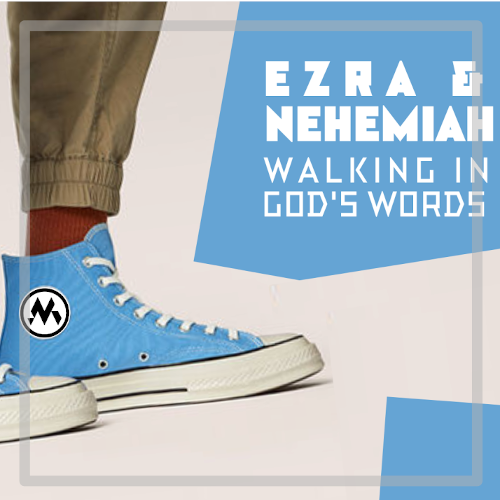 These days whenever I go home to Dirranbandi, I’m always filled with this weird sort feeling… On the one hand, I’m full of joy. But on the other, there is always a hint sorrow and sadness. Joy to be home, joy to be with family (especially my two nephews), joy to be with my border-collie sheep dog, joy to go to the pub and have a good meal. I’m full of joy… but I can also feel sad. Sad… because things aren’t quite the same anymore. Immense joy mixed with sorrow!

But, you know, that’s what I like about Ezra 3. There’s something comforting here about seeing God’s people-full of joy-and yet also full of sorrow. It’s comforting to see a people who live in the now but not yet… who live with the promises of God being fulfilled… but not yet fully complete. You see, Israel have been in exile-they’ve been scattered, they’ve had no real king or priesthood, they’ve had no altar to make sacrifices for sin, they’ve had no temple to connect with God. But now, in this part of the Ezra and Nehemiah, they’ve returned to the land to fix all that! And as we follow along, we’ll see that there are reasons for joy and reason for sorrow. So today, as we come along side God’s people in Ezra 3 to feel what they feel-we’re going to be comforted and we’re going to be reminded of the great encouragement that lies ahead of us in Christ. God willing, to help us in those moments of sorrow… And so the sermon’s going to be divided into three main parts… first, reasons for joy (which will take most of the time), second, reason for sorrow (which will be a lot quicker), and finally, what we look forward to in Christ.

But ironically, Ezra 3 shows us that Israel also has reason for sorrow (this is the second part). Now, there are actually a few reasons for sorrow that you might have picked up along the way… There are multiple reasons for sorrow, but the reason is seen in the people’s response to the temple foundation in verses 12-13. Notice how this part of the story ends… 12 But many of the older priests and Levites and family heads, who had seen the former temple, wept aloud when they saw the foundation of this temple being laid, while many others shouted for joy. 13 No one could distinguish the sound of the shouts of joy from the sound of weeping, because the people made so much noise. And the sound was heard far away. This great Gabba-like noise is actually kinda strange. It’s mixed with both joy and sorrow. The younger exiles who had grown up in Babylon are excited and full of joy as they looked ahead to this new temple. But the older exiles are wailing with tears in their eyes because they’d seen the previous temple in all of its glory. But the things is… we can’t fault the older generation, can we? We can’t fault them. They actually do have reason for sorrow. I mean, just take a listen to how glorious and how awesome God’s dwelling place has been in the past… I mean what a difference!? What a difference between the tabernacle, the first temple, and now this one! Then… Fire from heaven. Now… nothing. Then… The glory of the LORD filling the temple. Now… nothing. Then… a place so awesome you couldn’t go in… Now… tears of disappointment! You can’t fault the older generation because something is dramatically missing… God’s glorious presence! Whilst there is reason after reason for joy… there is one big reason for sorrow-it appears that God has not re-entered the temple. This is one of the first big hints in Ezra and Nehemiah that things are not as they should be… And it would raise (to any Israelite) all sorts of questions: Is God actually good? Is God faithful? Does God really love us? Does God’s love for Israel really endure forever? Are we really out of exile? God’s glorious presence seems absent-it is the reason for Israel’s sorrow. Just Joy! Ezra 3 is one great reminder, especially to us who are in Christ, that we share a similar pattern of joy and sorrow. There are so many reasons in Christ for joy, but there’s also sorrow. And it should comfort us (in a weird kinda way) that this is normal for the people of God, for you and I even, as we live in a time where God’s plans are still unfolding. But… We also need to be reminded of the encouragement in the story (and this is the final part)… We need to see how Ezra 3 points us forward… How it points us forward when we’re in those times of sorrow and when those moments of joy are just not long enough… We need to be encouraged that in and through Christ-sorrow will not be the last word… Pastor’s Heart: When I’m faced with the depths of my selfishness… When I’m frustrated with things in life that aren’t going my way… When I wish that things were easier than they really are… in my marriage, in my job, in my relationships… I need to be pointed forward… to the story which ends in joy… just joy! You see Ezra 3 should remind us of another story… A story yet to come… The moment when God’s people, you and I, will be together, with our king, with our priest, with the one who was sacrificed for us, living in and with the better and more glorious temple-Jesus Christ. It should remind us of the hope of a new creation… You see, sorrow wasn’t really the last word for the people of Israel here in Ezra 3… Even though the temple didn’t fill with God’s glory-God’s love for Israel did not stop. As an act of love, God sent his Son-the true and better temple who embodied the glory of God. And who came to dwell in their midst. As John writes: John 1:14 ¶ And the Word became flesh and [tabernacled] among us, and we have seen his glory, glory as of the only Son from the Father… Jesus Christ, the true temple-God’s glory in flesh-came into the world so that Israel (so that you and I) might be found and brought into Christ. For in Christ… we are brought together as one. In Christ, we have a King and a High Priest. In Christ, we have peace with God. In Christ, we have God’s very presence. As Paul writes in Ephesians 2: Eph 2:18 For through Christ we both have access in one Spirit to the Father. 19 So then you are no longer strangers and aliens, but you are fellow citizens with the saints and members of the [temple] of God… 22 In Christ you are being built together into a dwelling place for God by the Spirit. Because of God’s undying love, we have been joined, planted, and built into Christ, the true temple. Because of God’s undying love, we have joy in Christ. And because of God’s undying love, we await a day when there will be only joy… As John writes… . Rev 21:3 And I heard a loud voice from the throne saying, “Behold, the dwelling place of God is with man. He will dwell with them, and they will be his people, and God himself will be with them as their God. 4 He will wipe away every tear from their eyes, and death shall be no more, neither shall there be mourning, nor crying, nor pain anymore, for the former things have passed away… 5 Behold I am making all things new.”

Ezra 3 points us forward to Christ and to the time when sorrow won’t be the last word… When the Christian life, your life, moves between joy and sorrow, when we see-saw between God’s goodness in Christ and the reality of living this side of a new creation, when we feel the disappointment of things not being as they should be… know that this is normal… but also look ahead. Look to him who sits on the throne. Look to him who pours out abundant mercy and grace. Look to him who will right every wrong. Look to him who will make all things new… Dream of the moment where we will shout together-“He is good, his love for Israel endures forever”-with just joy. 1 Williamson, Ezra and Nehemiah, 47. 2 Dictionary of the Old Testament, Altar, 35.